Two unlikely heroes. One chance to save humanity…. They’ll take those odds.

There is a name that is uttered only in whispers. The Songmaker.

A ruthless rebel mage, he is bringing civil war to the once-peaceful kingdom of Amaury, enveloping all in a tide of violence. For Maegwin, a tormented priestess, the path forward lies in forgiving her temple’s enemies—but she dreams only of revenge.

For Rovann, a loyal mage haunted by his failures, salvation might be found in the unthinkable: defying the very king he swore to protect. If they are to succeed they must form an unlikely alliance. For someone must stand against the Songmaker. Someone must save Amaury from his dark designs.

But first, they’ll have to learn to trust each other

The Unraveling has begun. The barriers that separate the Seven Realms are breaking, threatening to send Chaos ripping through the universe, to the ruin of all.

In the kingdom of Amaury, the Council of Mages desperately tries to halt an army bent on sacking the capital. But how do you halt an army led by the dead?

In the west, Rovann, First of the Council of Mages, and Maegwin, priestess of Sho-La, set out on a desperate mission to save the Seven Realms. But beset by enemies on all sides, they’re not sure who to trust—least of all each other.

And in the center of this web waits the Songmaker, a shadowy figure whose final plans may hold the key to the salvation or destruction of creation itself.

The endgame is approaching. The Seven Realms are Unraveling. And in the kingdom of Amaury, the Songmaker is so near his goal…

Only Rovann, First of the Council of Mages, stands in his way.

But he is alone. Maegwin, his ally and lover, has betrayed him. Now she stands by the Songmaker’s side.

The forces arrayed against him are vast. The Songmaker’s army holds the capital in a pincer grip and a tide of revenants and rebel mages are flocking to his banner. All are converging on Tyrlindon.

And this is the place Rovann will have to destroy if he is to stop them. 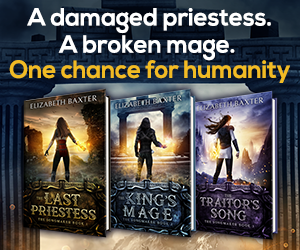 “It’s a dangerous business, Frodo, going out your door. You step onto the road, and if you don’t keep your feet, there’s no knowing where you might be swept off to.”

JRR Tolkien, The Fellowship of the Ring.